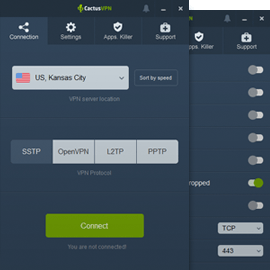 We always find new ways to create the best services for our users here at CactusVPN. To make this possible, we’ve added a number of new features to our Windows and macOS VPN apps that greatly enhance functionality and overall user experience. Many of these improvements expand on the existing capabilities of the apps, allowing users to customize their processes.

Let’s take a closer look at the new features highlights:

Offering the best services in an ever changing, fast-paced market can sometimes be challenging. We like to always take things a step further when it comes to offering trustworthy and reliable services. We believe in building long lasting partnerships with our users and offer them the best online experiences.

Share
Tweet
LinkedIn
Pin it
Posted on May 10, 2017 in News
By Sergiu Candja
Sergiu is a proud founder and CEO of CactusVPN. What started like a passion for internet security grew into a business that helps thousands of people across the globe to regain their freedom while using the Internet.